Bobby Groves was born in Maldon, Essex, where 2000 years ago the Romans developed a taste for the native oysters and they were shipped back to Rome as a highly prized delicacy. Bobby’s first job as a young lad was on the oyster farms, packing thousands of oysters into crates with frostbitten fingers in the Essex winter. It’s a long way from serving the rich and famous at Chiltern Firehouse, but it’s his physical first hand, lifelong, understanding of these strange creatures and their provenance that makes him so beloved of oyster fans from far and wide. In ‘Oyster Isles’, Bobby takes us on a journey around the oysters of the British Isles and Ireland, showing how their story is interwoven into the fabric of our history, culture, nature and people.

‘Bobby’s oyster travelogue is an ambitious, one-of-a-kind piece that shines a spotlight on the extraordinary and the everyday of the industry. It’s the stuff that oyster bucket lists are made of’ Julie Qiu, In A Half Shell blog

‘An amazing tome . . . The stories behind each oyster and location are informative, in depth, but, most importantly, fun’ Michel Roux Jr

The Great British oyster is deeply embedded in our geographical, historical and socio-cultural landscape. Five-thousand-year-old oyster shells have been discovered in the northern reaches of Scotland, and oyster shells are littered along the extinct riverbeds deep beneath the London of today. A highly prized delicacy of the Romans, the oyster has always been a class leveller: an everyman food of the poor during the Victorian age to a food of decadence during the twentieth century. It is a superfood; a biological water meter; an ecological superpower. The oyster card, ‘the world is your oyster’ – it has even crept into our language.

Bobby Groves, Head of Oysters at the Chiltern Firehouse, takes us on a wonderful journey of the British oyster, a five-thousand-mile motorcycle odyssey of Britain’s spectacular coastlines. He vividly brings to life this strange and marvellous creature, shining a light on its rich and vibrant history, its cultural impact and ecological importance as well as those oyster folk who work so hard to protect them. 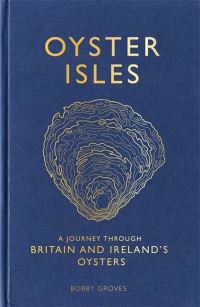