A Feminist Theory of Violence

The State will not protect us from gender violence. Our feminism must be anti-racist and decolonial, and must fight for everyone’s safety

The mainstream conversation surrounding gender equality is a repertoire of violence: harassment, rape, abuse, femicide. These words suggest a cruel reality. But they also hide another reality: that of gendered violence committed with the complicity of the State.

In this book, FranÃ§oise VergÃ¨s denounces the carceral turn in the fight against sexism. By focusing on ‘violent men’, we fail to question the sources of their violence. There is no doubt as to the underlying causes: racial capitalism, ultra-conservative populism, the crushing of the Global South by wars and imperialist looting, the exile of millions and the proliferation of prisons – these all put masculinity in the service of a policy of death.

Against the spirit of the times, FranÃ§oise VergÃ¨s refuses the punitive obsession of the State in favour of restorative justice. 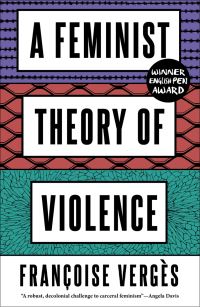 You're viewing: A Feminist Theory of Violence £12.99
Add to basket