This book tells the story of women’s football in England since its 19th-century inception through pen portraits of its trailblazers. Find out about the women who broke barriers and set records – the legends of the game who built the foundations of the stage upon which today’s stars flourish.

‘At what feels like a pivotal moment, Carrie’s forensic research and depth of knowledge make her the perfect person to guide us through the constantly changing landscape of women’s football’ – Kelly Cates, TV presenterEngland’s Lionesses are on the front and back pages; their stars feature on prime-time television; they are named in the national honours lists for their contribution to their sport and to society. The names of Lucy Bronze, Steph Houghton and Ellen White are emblazoned across the backs of children’s replica jerseys. These women are top athletes – and top celebrities. But in 1921, the Football Association introduced a ban on women’s football, pronouncing the sport ‘quite unsuitable for females’.That ban would last for half a century – but despite official prohibition the women’s game went underground. From the Dick, Kerr Ladies touring the world to the Lost Lionesses who played at the unsanctioned Women’s World Cup in Mexico in 1971, generations of women defied the restrictions and laid the foundations for today’s Lionesses – so much so that in 2018 England’s Women’s Super League became the first fully professional league in Europe…when just a few decades previously women were forbidden to play the sport in England at all.This book tells the story of women’s football in England since its 19th-century inception through pen portraits of its trailblazers. The game might have once been banned because of its popularity – find out about the subversive women who kept organising their teams and matches despite the prohibition, who broke barriers and set records – the legends of the game who built the foundations of the stage upon which today’s stars flourish. 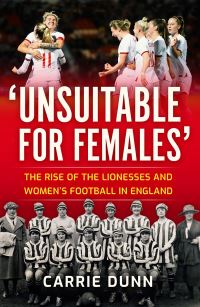 You're viewing: ‘Unsuitable for Females’ £14.99
Add to basket