In the first decades of the 20th century, five women – Katherine Routledge, Maria Czaplicka, Winifred Blackman, Beatrice Blackwood, and Barbara Freire-Marreco – arrived at Oxford to take the newly created Masters in Anthropology. Though their circumstances differed radically, all were intent on visiting and studying remote communities a world away from their own. Through their work, they resisted the prejudices of the male establishment, proving that women could be explorers and scientists, too. In the wastes of Siberia; in the villages and pueblos of the Nile and New Mexico; on Easter Island; and in the uncharted interior of New Guinea, they found new freedoms – yet when they returned to England, loss, madness and self-doubt awaited them. Frances Larson’s masterful group biography is a revelatory portrait of five hidden heroines of British scholarship.

The inspiring story of five women who set out to explore the furthest reaches of the globe and redefine scholarshipAt the dawn of the twentieth century, Katherine Routledge, Maria Czaplicka, Winifred Blackman, Beatrice Blackwood and Barbara Freire-Marreco set out to explore the furthest reaches of the globe. Resisting pernicious sexism and misogyny, they were among the first women to study at university and went on to chart now-vanished worlds, seeking new freedoms in in the wastelands of Siberia, the uncharted interior of New Guinea, on Easter Island, and in the villages of the Nile. Yet upon their return to England, they found only loss, madness and regret waiting for them.An extraordinary insight into women’s suffrage at the turn of the century and a revelatory study of Britain’s colonial legacy, Undreamed Shores is an extraordinary portrait of a pioneering quintet whose struggles helped usher in a brighter dawn. 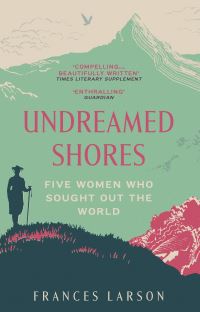