The Prime Ministers We Never Had

BOOK OF THE YEAR, The Times, Guardian and ProspectWas Harold Wilson a bigger figure than Denis Healey? Was John Major more ‘prime ministerial’ than Michael Heseltine? Would David Miliband have become prime minister if it were not for his brother Ed? Would Ed have become prime minister if it were not for David? How close did Jeremy Corbyn come to being prime minister? In this piercing and original study, journalist and commentator Steve Richards looks at eleven prime ministers we never had, examining what made each of these illustrious figures unique and why they failed to make the final leap to the very top. Combining astute insights into the demands of leadership with compelling historical analysis, this fascinating exploration of failure and success sheds new light on some of the most compelling characters in British public life. 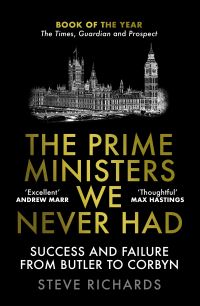 You're viewing: The Prime Ministers We Never Had £10.99
Add to basket