The first detailed study of the major programme of theatre-building in Britain between the 1950s and the 1980s, Modern Playhouses draws on a vast range of archival material to present the history of post-war theatre buildings as a history of ideas relating not only to performance but also to culture, citizenship, and the modern city.

Modern Playhouses is the first detailed study of the major programme of theatre-building which took place in Britain between the 1950s and the 1980s. Drawing on a vast range of archival material – much of which had never previously been studied by historians – it sets architecture in a wide social and cultural context, presenting the history of post-war theatre buildings as a history of ideas relating not only to performance but also to culture, citizenship,and the modern city.During this period, more than sixty major new theatres were constructed in locations from Plymouth to Inverness, Aberystwyth to Ipswich. The most prominent example was the National Theatre in London, but the National was only the tip of the iceberg. Supported in many cases by public subsidies, these buildings represented a new kind of theatre, conceived as a public service. Theatre was ascribed a transformative role, serving as a form of ‘productive’ recreation at a time of increasing affluenceand leisure. New theatres also contributed to debates about civic pride, urbanity, and community. Ultimately, theatre could be understood as a vehicle for the creation of modern citizens in a consciously modernizing Britain.Yet while recognizing, as contemporaries did, that the new theatres of the post war decades represented change, Modern Playhouses also asks how radically different these buildings really were, and what their ‘mainstream’ architecture reveals of the history of modern British architecture, and of post-war Britain. 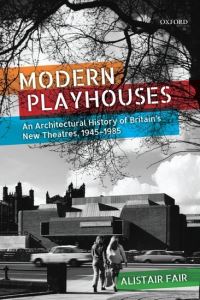