View basket “Detransition, Baby” has been added to your basket.

The Earth’s spiralling population has finally been controlled. Lifespans are limited to eighty years, except for those who make an extreme choice: to become a commune. Five minds sharing one body, each living for four hours at a time. But with a combined lifespan of nearly 150 years. Alex, Kate, Mike, Sierra and Ben have already spent twenty-five years together in what was once Mike’s body, their frequent personality clashes leading to endless bickering, countless arguments, and getting themselves stranded on a Russian arctic freighter. Wanting to buy upgrades for their next host body, they decide to travel to a Death Park where games are played and time can be gambled like money. But things go very wrong when Kate accepts a dangerous offer, and one of them disappears. It soon becomes clear that someone is trying to kill off members of the commune. But why?

‘Addictive… will remain with you long after you emerge from the rabbit hole’ – THE TIMES’A marvellously twisty whodunnit with the clockwork ingenuity of an Agatha Christie’ – FINANCIAL TIMESSHARING A BODY CAN BE MURDER Alex, Kate, Mike, Sierra and Ben have spent twenty-five years trapped together. And there’s no escape. They share one body, part of humanity’s answer to its dangerously spiralling population. After more than two decades of bickering and petty vendettas, the one thing they can agree on is that they need a better host, and so they travel to a Death Park where they can win enough to get them the upgrades that will make the next twenty-five years bearable. But things go very wrong when Kate accepts a dangerous offer, and one of them disappears. Someone is trying to kill off members of the commune. But why? Is one of them responsible? Or is an outsider playing a deadly game? It’s hard enough to catch a murderer. It’s almost impossible when you might be sharing a body with them…’Gripping and intriguing on every level’ – SARAH PEARSE ‘A dazzling, thrilling rollercoaster ride’ – ALEX PAVESI 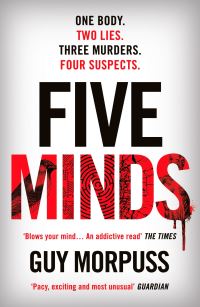