This collection’s title points to the underlying philosophy expressed in these poems: that earthly joy is, or ought to be, just within, but is often beyond our reach, denied by racism, misogyny, physical cruelty and those with the class power to deny others their share of worldly goods and pleasures.

Roger Robinson’s range is wide: the joys and pains of family life; observations on the threatening edge of violence below the surface energies of Black British territories in London; memories of an older Trinidad and visits that tell him both how he and the country have changed; emblematic poems on the beauty and often bizarre strangeness of the world of animals; quizzical responses to the strange, the heartening, and the appalling in incidents or accounts of incidents encountered in daily life; reflections on the purposes and costs of making art, as in fine poems on a George Stubbs’ painting, cocaine and Coltrane’s Ascension, and questioning thoughts on the ideologies of Toni Morrison and John Milton. The poems express a fierce anger against injustice, but also convey the irrepressible sense that Roger Robinson cannot help but love people for their humour, oddity and generosity of spirit. With A Portable Paradise, Roger Robinson shows us that he can be the voice of our communal consciousness, while at the same time always subverting, playing and beguiling with his beautiful verse.Afua Hirsch 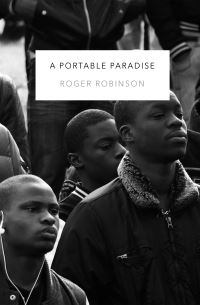 You're viewing: A Portable Paradise £9.99
Add to basket