Trawlerman’s Turquoise, Matthew Caley’s sixth collection, features various seemingly recherchÃ© elements – telepathy, Madame Blavatsky, epistolary novels, muse worship, Balzac’s coffee addiction and Thomas Merton’s accidental electrocution amongst them – not always as straightforward ‘subject matter’, but caught up in the backdraft of the poems’ acceleration. The book’s title derives from the long, central, hyper-associative poem, ‘from The Foldings’ – trawlerman’s turquoise being a phrase to describe a psychic glimpse of the ocean for perennial inner-city dwellers, who have only ever heard rumour of one. Caley’s lyrics and love poems are poised between sincerity and its inverse, and a seeming ‘parallel world’, which gradually emerges, sits at odds with, and sheds light on, the current state of our actual world – full of melting borders, random dangers, shifting identities, misread communiquÃ©s, false reports and information overload – destabilising and exhilarating in equal measure. 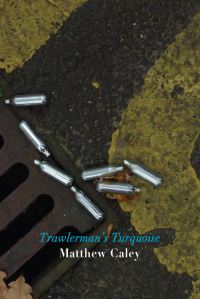