A fairy tale run amok, ‘The Taiga Syndrome’ follows an unnamed ex-detective as she searches for a couple who has fled to the far reaches of the earth. A betrayed husband is convinced by a brief telegram that his second ex-wife wants him to track her down – that she wants to be found. He hires the ex-detective, who sets out with a translator into a snowy, hostile forest where strange things happen and translation betrays both sense and one’s senses. Tales of ‘Hansel and Gretel’ and ‘Little Red Riding Hood’ haunt the ex-detective’s quest into a territory overrun with the primitive excesses of capitalism – accumulation and expulsion, corruption and cruelty – though the lessons of her journey are more experiential than moral: that just as love can fly away, sometimes unloving flies away as well. That sometimes leaving everything behind is the only thing left to do. 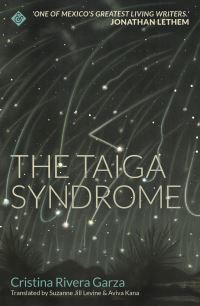 You're viewing: The Taiga Syndrome £10.00
Add to basket