This study looks at the Independent Group of artists, designers and writers who, in the early 1950s, aimed to raise the status of popular objects and icons within modern visual culture. The development of the Group is mapped against the changing nature of modernism during the Cold War era.

This study looks at the artists, designers and writers who formed the Independent Group in the early 1950s including such influential figures as Richard Hamilton, Eduardo Paolozzi, Nigel Henderson, William Turnball, Rayner Banham and Alison and Peter Smithson. As a group they aimed to raise the status of popular objects and icons within modern visual culture. The development of the Independent Group is mapped out against the changing nature of modernism during the Cold War era, as well as the impact of mass consumption on post-war British society. In this book, Massey examines the cultural context of the formation of the Group, covering the founding of the Institute of Contemporary Arts in London, the meanings of modernism, and the creation of a national identity. Key exhibitions such as “Parallel of Life and Art” and “This Is Tomorrow” are also examined. 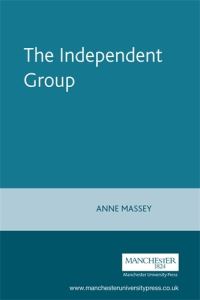 You're viewing: The Independent Group £18.99
Add to basket