Orestes’ mother prepares hundreds of quesadillas for Orestes and the rest of their brood. After another fraudulent election and the disappearance of his younger brothers Castor and Pollux, he heads off on an adventure. With Quesadillas, Juan Pablo Villalobos serves up a madcap satire of politics, big families, and what it means to be middle class.

It’s the 1980s in Lagos de Moreno – a town where there are more cows than people, and more priests than cows – and a poor family is struggling to get by. The father, a school teacher, insists on practising and teaching the art of the insult, while the mother prepares hundreds of quesadillas to serve to their numerous progeny: Aristotle, Orestes, Archilochus, Callimachus, Electra, Castor and Pollux. The family witnesses a revolt against the Institutional Revolutionary Party and its umpteenth electoral fraud. This political upheaval is only the beginning of Orestes’ adventures and his uproarious crusade against the boredom of rustic life and the tyranny of his older brother.In Quesadillas Juan Pablo Villalobos serves up a wild banquet. Chock-full of inseminated cows, Polish immigrants, parading pilgrims, alien spacecraft and psychedelic watermelons, almost anything goes in this madcap Mexican satire of politics and class.Orestes meets a procession of pilgrims, a stoner uncle called Pink Floyd and a beguiling politician who teaches him how to lie, and he learns some valuable lessons about families, truth and bovine artificial insemination. With Quesadillas, Juan Pablo Villalobos serves up a wild banquet. Anything goes in this madcap Mexican satire about politics, big families, and what it means to be middle class. 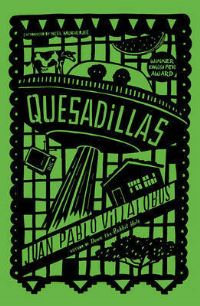 You're viewing: Quesadillas £7.99
Add to basket