The life and times of the Great British Pudding, both savoury and sweet – with 80 recipes re-created for the 21st century home cook.

Winner in the Gourmand World Book Awards for ‘Culinary Heritage’

Shortlisted for the Fortnum & Mason awards

‘… a work of art’ delicious. magazine

Let Regula Ysewijn take you to the heart of what it means to be British in this beautiful tome: part-recipe book, part-culinary history of the British pudding.

Captivated by British culinary history – from its ancient savoury dishes such as the Scottish haggis to traditional sweet and savoury pies, pastries, jellies and ices, flummeries, junkets and jam roly-poly – Regula tells the story of British food, paying homage to the great British pudding, which is versatile and wonderful in all its guises.

Delving through historical texts dating back as far as the fourteenth century, Regula’s refreshingly original book documents the history of the British pudding, rediscovering long-forgotten flavours and food fashions along the way.

With stunning photography, illustrations and fascinating facts, Pride and Pudding recreates more than 80 recipes for the twenty-first century palate. It is a must-have cookbook for anybody who delights in British food and its culinary history. 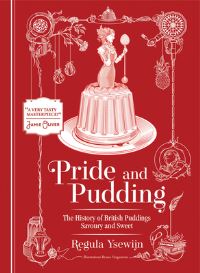 You're viewing: Pride and Pudding £30.00
Add to basket