This is a book to which the old clichÃ© ‘never a dull line’ can be honestly applied. It is as good a first-hand account of the mad world of Hitler’s Europe as is ever likely to come off the printing press. And there is something oddly fitting and perhaps prophetic, in the fact that a woman should have written it.

This sensational 1941 memoir of life on wartime Europe’s frontline by a trailblazing female reporter is an ‘unforgettable’ (The Times) rediscovered classic, introduced by Christina Lamb.

Paris as it fell to the Nazis
London on the first day of the Blitz
Berlin the day Germany invaded Poland
Madrid in the Spanish Civil War
Prague during the Munich crisis
Lapland as the Russians attacked
Moscow betrayed by the Germans
Virginia Cowles has seen it all.

As a pioneering female correspondent, she reported from the frontline of 1930s Europe into WWII always in the right place at the right time. Flinging off her heels under shellfire; meeting Hitler (‘an inconspicuous little man’); gossiping with Churchill by his goldfish pond; dancing in the bomb-blasted Ritz … Introduced by Christina Lamb, Cowles’ incredible dispatches make you an eyewitness to the twentieth century as you have never experienced it before.

‘An amazingly brilliant reporter … One of the most engrossing [books] the war has produced.’ New York Times Book Review

What readers are saying:
The queen of historical name-dropping

Holy cow! What a wonderful find!!

Most unexpectedly great book that I have read in years. Reads like a novel [but] this is real life.

I can’t recommend this book enough. Cowles’ voice and humanity are her greatest assets, but her willingness to be where the action was – and always find trouble – paid off.

A marvel. Her ability to capture anecdotes and dialogue that offer surprising insights into historic personages and events is a frequent source of wonder. It was difficult for me not to drive my family crazy wanting to read them quotes.

The intrepid Virginia Cowles was in the right places at the right times and connected to the right people. What a life she led! 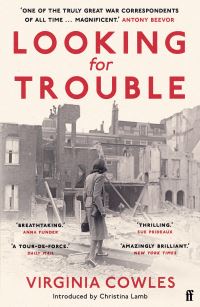 You're viewing: Looking for Trouble £12.99
Add to basket