From Manchester With Love

Tony Wilson is one of the most legendary music industry figures of his generation. Nicknamed Mr Manchester, he transformed the Northern music scene as founder of Factory Records and the HaÃ§ienda nightclub after earning a cult following as a television presenter. Working with legendary bands such as Joy Division, New Order, and the Happy Mondays, Wilson was at the very heart of the Manchester music phenomenon and regenerated the culture of an entire city. Celebrated music journalist Paul Morley knew Wilson personally, and is uniquely placed to tell the fascinating and intimate story of his life. He explores Wilson’s existence through the eyes of those closest to him, and offers a rare insight into his own personal papers and diaries.

THE TIMES & UNCUT MUSIC BOOK OF THE YEAR

A BOOK OF THE YEAR
SUNDAY TIMES, NEW STATESMAN, MOJO, LOUDER THAN WAR

Tony Wilson was a man who became synonymous with his beloved city. As the co-founder of the legendary Factory Records and the HaÃ§ienda, he appointed himself a custodian of Manchester’s legacy of innovation and change, becoming a cultural pioneer for the North. To Paul Morley, he was this and much more: bullshitting hustler, flashy showman, inventive broadcaster, self-deprecating chancer, publicity seeker, loyal friend. It was Morley to whom Wilson left a daunting final request: to write this book.

From Manchester with Love is the biography of a man who changed the world around him through sheer
force of personality. In the cultural theatre of Manchester, Tony Wilson broke in and took centre stage.

‘Not just a “biog” but the story of a city’s history and culture and a unique and disappearing figure.’
STUART MACONIE, NEW STATESMAN

‘Morley’s biography is as illuminating on Wilson’s strange ability to hold others in his orbit, even after his death, as it is on the story of his life.’
THE SPECTATOR

‘The man/myth Wilson died aged 57 in 2006, but here he burns on fantastically bright.’
UNCUT 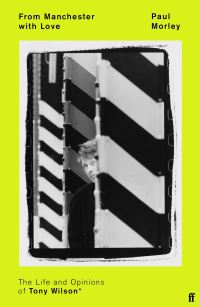 You're viewing: From Manchester With Love £20.00
Add to basket