A retelling of Aesop’s Fables, illustrated by Robert Ingpen.

Aesop’s Fables belong to every one of us. They were once simply the words of a slave; a man who lived 600 years before Christ. They were written down by a Greek, and then a Roman, and they spread, like the armies of Rome, across the known world. They were told around heathen campfires, and noble hearths; whispered in sacred monasteries and churches; lectured in Victorian school rooms and acted out by children at play.

Each little fable is bound up with 2000 years of wisdom and truth. From these we know that a mouse is too weak to withstand the strength of a lion, yet too mighty to be bound by ropes. We learn that the violence of the North Wind is no match for the gentle beaming of the unrelenting Sun. We know in our hearts that the sheep must push through life, and try to overcome its many dangers, that the wolf will trick and deceive to survive, and that we cannot pretend to understand the logic of the gods if we do not hold ourselves to the same standard.

Therefore, Aesop’s Fables belong to all of us, as Stone Age cave paintings belong, not to the artist, but to human civilisation. It is a book about what it is to be human, cherished by each generation and passed on to the next. 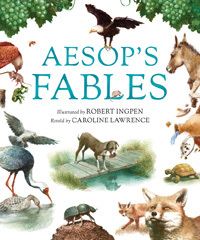